Last Sunday we went to Bowes Museum, near Barnard Castle in County Durham. It has been one of my favourite places since I went there on a school trip as a child. The building is fabulous - a French chateau dropped into the beautiful countryside of Teesdale. It was established by John and Josephine Bowes as a purpose built museum to house their extensive collection of art and artifacts. It was first opened to the public in 1892.

The most famous piece, and the emblem of the museum is the Silver Swan, a clockwork automoton dating from 1773. John and Josephine first saw it at the Paris International Exhibition in 1867. Another fan of the swan, who saw it at the same exhibition, was Mark Twain. He wrote in The Innocents Abroad;


'I watched the Silver Swan, which had a living grace about his movement and a living intelligence in his eyes - watched him swimming about as comfortably and unconcernedly as it he had been born in a morass instead of a jeweller’s shop - watched him seize a silver fish from under the water and hold up his head and go through the customary and elaborate motions of swallowing it...'

We saw that exact same thing last Sunday, almost 150 years after Mark Twain did. The sophisticated 21st century audience still gave a round of applause when the swan swallowed the fish!

There is lots to see in the museum, but we had gone specifically to see two temporary exhibitions; Henry Poole & Co. Founder of Savile Row: The Art of Bespoke Tailoring and Wool Cloth, and Laura Ashley, Romantic Heroine. 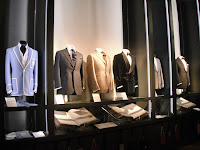 Henry Poole & Co. was opened in 1806 and established Savile Row as the centre for bespoke tailoring in London.
Their customers included Winston Churchill, Charles Dickens and Edward VII. They have their customer ledgers from 1846, and some of them were on view, open at the pages of their famous clients. When Edward VII was Prince of Wales he asked Henry Poole & Co. to cut a short, blue evening coat for him. This garment is said to be the original dinner jacket (tuxedo in the US). 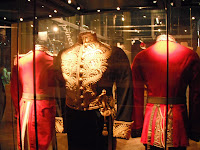 They hold Royal Warrants still, including the Royal Warrant for the Queen's State Livery.  The exhibition showed various styles of suits, and also explained the process of making a bespoke garment. There were fabric sample books available so we could feel the wonderful quality of the material used in these garments.

The Laura Ashley exhibition showed, in the company's 60th year, almost 100 examples of Laura Ashley dresses from the 60s and 70s. 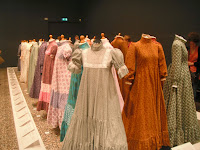 There was very little about the company or Laura Ashley herself, the focus was entirely on the frocks. I absolutely loved the way this exhibition was staged. The dresses were packed together in two blocks, and the information about them was at floor level so there was no obstruction to viewing them. It was very simple and effective. What amazed me about the dresses was how much they harked back to earlier centuries. Some of them looked Regency, others looked like something Laura Ingalls would've worn on the prairie. Many of 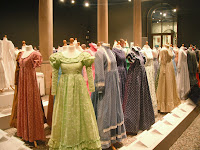 them looked quite restrictive with high collars and tight sleeves. I was puzzled as to why, after women's fashion had become so much more free in the 60s, women would choose these styles again. I wouldn't particularly want to wear most of the dresses, but I did like the prints.

It had been 5 or 6 years since I last visited the Bowes Museum and I certainly won't be leaving it that long again. It's the kind of place where there is always something new to see, and things that have been there all the time that you never noticed before.
Posted by seagreen reader at 17:33