The Casual Vacancy by JK Rowling

This story begins with the death of Barry Fairbrother, a parish councillor in the picture perfect village of Pagford. His death leaves a space on the parish council, the 'casual vacancy' of the title. This is a tumultuous time for Pagford, they are finally within sight of getting rid of The Fields, a council estate on the edge of the village which comes under their jurisdiction. Many see The Fields as a burden, and its residents as an expensive drain on Pagford's resources.

No part of Pagford's unwanted burden caused more fury or bitterness than the fact The Field's children now fell inside the catchment area of St Thomas' Church of England Primary School. Young Fielders had the right to don the coveted blue and white uniform, to play in the yard beside the foundation stone laid by Lady Charlotte Sweetlove and to deafen the tiny classrooms with their strident Yorvil accents.

Yorvil is the local town to which The Fields will become attached if the vote is carried.

The election is the backdrop against which the story takes place. We see the arguments played out for and against keeping The Fields (Barry had been for keeping it part of Pagford). There is snobbery at work, there is fear of difference, it's easy to laugh at the pretensions of those who want to get rid of The Fields. But in the character of Terri Weedon JK Rowling presents us with a dilemma. Terri is a resident of The Fields. She is a drug addict, a prostitute and a thief. She's had two children taken into care, and the two she has at home with her suffer because of her neglect and chaotic lifestyle. I can recognise that Terri had a chaotic childhood and was neglected herself. I know that addiction is an illness. I can sympathise with her and think that she should be offered help. But, truthfully, I wouldn't want to live near her. So what do we do with the people who live at the edges of society, how do we help them, who is it who helps them? By setting her story in a small village JK Rowling brings the questions very close to home. It's not faceless bureaucrats making sweeping policy decisions. It's people like you and me deciding where we stand.

I really like the way JK Rowling captures the teenage characters in the book. While the adults are getting on with the election their children are dealing with problems of their own. Many of the problems are of their parents making. Krystal Weedon is perhaps the most pivotal character in the book. In a way she exemplifies everything Pagford fears about The Fields. She is loud, crude, haphazard, angry and disrespectful. But she is also protective of her mother, Terri. She loves her little brother and is determined to keep him from being taken into care. She is very upset about the death of Barry Fairbrother, who was a mentor to her and helped her believe in herself. With a bit of support Krystal could make something of her life, but now that Barry has gone who will give her that support?

JK Rowling is a great storyteller and I found myself completely drawn into this book. I thought it was thought provoking, and it left me feeling a bit sad. I'd recommend it.
Posted by seagreen reader at 11:42 4 comments:

A House Unlocked by Penelope Lively 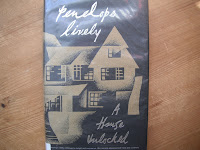 In this book Penelope Lively uses her memories of Golsoncott, her grandparent's house in Somerset to discuss social changes in England during the twentieth century. Each chapter is titled according to items  in the house which Lively remembers, and these items are the starting point for the discussion. So, for example, the second chapter is entitled 'The Children on the Sampler'. It begins with a description of a fire screen which was embroidered by her grandmother, who was a very accomplished needlewoman;

It is formal and stylized, in the sampler tradition, with the house at the top and beneath it significant elements of the garden - lily pond with goldfish shimmering beneath the blue stitched water, dovecot with white doves, sundial, mole and molehill, frog, toad, dragonfly.....Below that is the stable block, horses peering from loose boxes, each named, and a row of prancing dogs beneath - Sheltie and Waif and Merlin and the famous Dingo, a real Australian dingo bought from London Zoo by my aunt Rachel. At the very bottom is a line of children. Not as you might think, grandchildren, but the wartime evacuees.

Lively then goes on to write about the evacuees who were billeted at Golsoncott, and more generally about the effect of the evacuation on the country. Other chapters cover the opening up of the West Country to tourism with the coming of the railways, the role of the church in rural life, and garden history, among other subjects.

Lively's references to her own family history have the effect of making the subjects personal and real, but she isn't sentimental about the past. I don't think I have read any of Penelope Lively's novels, and this book has made me want to seek them out.
Posted by seagreen reader at 21:12 6 comments: