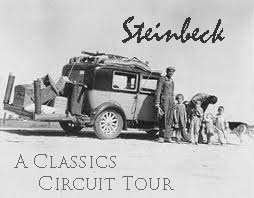 When I was about 17 I bought an anthology of some of John
Steinbeck's novels. It was a massive hardback book, very heavy. I was about halfway through Cannery Row and loving it when I decided that the book was just too uncomfortable to read and I would get myself a paperback of Cannery Row and finish it from that. Twenty-five years later, thanks to The Classics Circuit I am finally finishing it.

This is a book without a plot as such. It is a description of the fictional Cannery Row in Monterey California. It is a coastal town and its main industries are fishing, and the canning factory. Steinbeck paints an affectionate picture of a motley group of outsiders. The neighbourhood seems to be entirely populated with eccentrics. It is a tightly knit community where people look out for one another and are only too aware of each others foibles.
Everyone does their shopping at Lee Chong's grocery shop, which 'while not a model of neatness, was a miracle of supply'. Lee Chong is generous with credit until it gets too much, then he simply cuts off the supply. This cutting off of credit frequently happens to Mack and his friends. Steinbeck describes Mack thus:

Mack was the elder, leader, mentor, and to a small extent the exploiter of a little group of men who had in common no families, no money, and no ambition beyond food, drink, and contentment. But whereas most men in their search for contentment destroy themselves and fall wearily short of their targets, Mack and his friends approached contentment casually, quietly and absorbed it gently.

Mack is a work-shy charmer, but good hearted. He and the boys decide to put on a party for Doc, the marine biologist who lives in Cannery Row. Doc is a man apart. He is well liked and respected by the rest of the community, but is somehow separate from them. Whether this is because he is better educated than most of the people round him, or whether it is just something in his personality I can't say. He doesn't lack company, yet he seems lonely.
The preparations for the party take up a great deal of the book. Along the way we meet other, more peripheral characters. There is Dora Flood, the local madam:

Dora is a great woman, a great big woman with flaming orange hair and a taste for Nile green evening dresses. She keeps an honest, one-price house, sells no hard liquor, and permits no loud or vulgar talk in her house. Of her girls some are fairly inactive, due to ages and infirmities, but Dora never puts them aside, although as she says, some of them don't turn three tricks a month, but they go right on eating three meals a day.

Then there is Frankie, a young boy who hero-worships Doc. Nowadays we would say he had learning difficulties and he would get specialist help, but in the 1930s he was just kicked out of school. Not wanted at home he has to fend for himself and Doc takes pity on him.
The story takes place during the Depression and we see how some people had to cope with very little money. Mr and Mrs Malloy are reduced to living in a disused boiler. Mary Talbot loves to give parties but can't afford to, so gives tea parties for the neighbourhood cats.
I think the over-riding feeling of the novel is optimism. Times were very hard and many people had very little, but most people managed to be grateful for what they had. In the case of Mack we see someone who has opted out of the mainstream altogether. Mack's life would probably be the same if he was living through a boom. There is also stoicism and resiliance in the characters and they are bolstered by their community.

This book was just as good as I remembered and I definitely won't leave it another twenty-five years before I read it again.